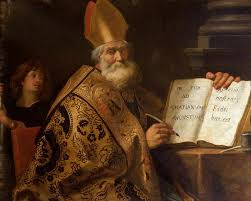 This is the memorial for Bishop Ambrose. He was Bishop of Milan, Italy. He is a Doctor of the Church. He died in 397.

"Ambrose was descended from an Ancient Roman family, which, at an early period had embraced Christianity, and numbered among its scions both Christian Martyrs and high officials of State. At the time of his birth his father, likewise named Ambrosius, was Prefect Of Gallia, and as such ruled the present territories of France,Britain, and Spain, together with Tingitana in Africa. It was one of the four great prefectures of the Empire, and the highest office that could be held by a subject."

"The special character and value of the writings of St. Ambrose are at once tangible in the title of Doctor of the Church, which from time immemorial he has shared in the West with St. Jerome, St. Augustine, and St. Gregory. He is an official witness to the teaching of the Catholic Church in his own time and in the preceding centuries."

"Most of his writings are really homilies, spoken commentaries on the Old and New Testaments, taken down by his hearers, and afterwards reduced to their present form...

In Ambrose the Native Roman genius shines out with surpassing distinctness; he is clear, sober, practical, and aims always at persuading his hearers to act at once on the principles and arguments he has laid down, which affect nearly every phase of their religious or moral life. "He is a genuine Roman in whom the ethico-practical note is always dominant. He had neither time nor liking for philosophico-dogmatic speculations. In all his writings he follows some practical purpose."

Quotes from the Catholic Encyclopedia