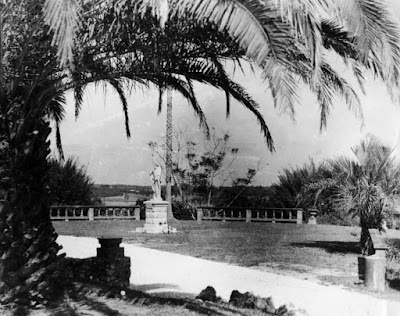 A statue of Saint Leo stood for many years in front of the four-story Saint Leo Hall. Part of the stairway into the building can be seen in the lower left of the picture.

Friday, November 10, 2017 is the solemnity of Pope Saint Leo the Great, Doctor of the Church at Saint Leo Abbey.

When the Vandals under Genseric occupied Rome, Saint Leo convinced the invaders to not pillage or kill the citizens.  Saint Leo was courageous in his trust in God and steadfast in his protection of the Church and its flock.

In the same way, Saint Leo Abbey has overcome many trials in its long history.  The abbey's monks and abbots, especially Abbot Isaac, have the courage and faithfulness of Saint Leo.

++ Join the Benedictine monks at 9:00 am on Friday for a Solemnity Mass.  All are welcome to this celebration.