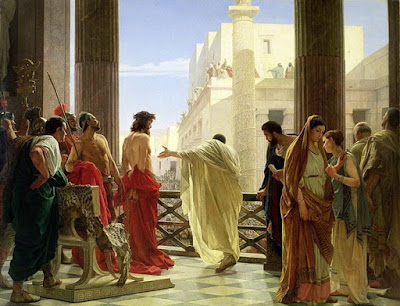 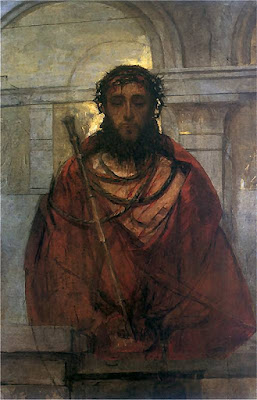 The schedule for the celebration that will take place in the Saint Leo Abbey Church will be as follows:

Holy Thursday, April 18, Mass of the Lord's Supper: 7:00 pm, followed by Eucharistic Adoration throughout the night.

- There will not be a Mass on Easter Sunday morning since the monks will celebrate the Easter Vigil Mass on Holy Saturday.

For more information on the Easter Triduum, please see this link: http://www.usccb.org/prayer-and-worship/liturgical-year/triduum/

About the cover art:

From the Gospel of John Chapter 19:

"Pilate therefore went forth again and saith to them: Behold, I bring him forth unto you, that you may know that I find no cause in him. (Jesus therefore came forth, bearing the crown of thorns and the purple garment.) And he saith to them: Behold the Man. When the chief priests, therefore, and the servants had seen him, they cried out, saying: Crucify him, Crucify him. Pilate saith to them: Take him you, and crucify him: for I find no cause in him. The Jews answered him: We have a law; and according to the law he ought to die, because he made himself the Son of God."

The irony Saint John the Apostle often includes in his Gospel is shown in this passage too. "Behold the Man" is true, but masks the ultimate truth of who is there on the balcony and why the Jews want him killed: behold your King, the son of God.

In his painting, Pilate displays Jesus to the angry crowd. Pilate's wife turns away and cautions another woman as if to say, "This is nothing to be looked at. Do not become involved. He is the righteous one, not us."

Pilate's wife had earlier warned him, ‘Have nothing to do with that righteous man. I suffered much in a dream today because of him.’” (Matthew 27:19).

Tradition including Origen (one of the Greek Fathers of the Church) says that she was converted and became one of the earliest followers of Jesus Christ.

"One of the more famous modern versions of the Ecce Homo [Behold the Man] motif was that by the Polish artist Adam Chmielowski, who went on to found, as Brother Albert, the Albertine Brothers (CSAPU) and, a year later, the Albertine Sisters (CSAPI).

"Adam Chmielowski was proclaimed a saint on 12 November 1989 by Pope John Paul II.

"Chmielowski's Ecce Homo painted between 1879 and 1881), was significant in Chmielowski's life, as it is in Act 1 of Wojtyla's play.

"Pope John Paul II is said to have kept a copy of this painting in his apartment at the Vatican.

"The original can be viewed in the Ecce Homo Sanctuary of the Albertine Sisters in Kraków." Source
Posted by Saint Leo Abbey Oblates at 4/12/2019